Water is a tasteless, odorless, colorless compound made up of two gases: hydrogen and oxygen. When hydrogen is burned in oxygen, water is formed.

Do I have to use salt?

Why does the water softener have to add salt to the water?

Someone told me that softened water feels ‘slimy’.

When you wash your skin with hard water, there is a layer of soap and minerals that is left on your skin. This is what causes the supposed ‘squeaky clean’ feeling. With soft water, the soap is completely rinsed away leaving just the natural oils your skin produces.

How much sodium is added to the water by the softener?

That depends on the hardness of the original water. This table shows the additional amount of sodium consumed by drinking one quart of softened water.

As a comparison, one slice of white bread has 161 milligrams of sodium; 3/4 cup of canned baked beans = 1130 milligrams; 1 tablespoon of catsup = 204 milligrams; 1 medium frankfurter = 610 milligrams; and 1 cup of whole milk = 127 milligrams. Even a common Alka Seltzer tablet contains 532 milligrams of sodium. However, if you suffer from hypertension or are on a sodium restricted diet, you should consult your doctor about the proper water for drinking.

Do I need to have an exact amount of salt in the brine tank for the softener to regenerate properly?

Will a Reverse Osmosis system remove the salt from the softened water?

Yes, an H2O TO GO Reverse Osmosis system will remove 99.8% of the salt from the softened water.

After years of servicing systems designed in other parts of the country or world to accommodate our unique water needs here in the Las Vegas Valley, it quickly became apparent that most systems aren't designed to treat our unique water purification needs. For this reason, H2O to Go started designing water purification systems designed to treat the water found in most households in Southern Nevada. 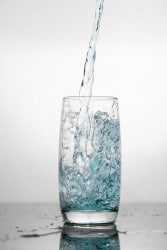 For the safety of our customers, employees and community, H2O to GO is following all Center for Disease Control guidelines and best practices. Dismiss